This person that inspires me is my sister who lives in Australia. She was born in 2005, if you didn’t know. She has been there for me all my life, just not in real life, online. My sister is currently in college and is in Year 12, she is 17. She is also that kind of person that likes art and likes to play instruments like, guitar,piano and the flute. She is kind of amazing in my opinion.

Write about their life.

She was born in New Zealand but moved to Australia in 2015. She currently lives in Sydney still, but it’s okay because she visits every christmas, and sometimes when it’s her birthday. She works at a Starbucks near her house, which is amazing! She is always talking about how awesome her job is and how she is never going to quit! Another thing she does when she is at college is apply for art competitions. She came 1st in 4 competitions which is amazing. When she has nothing to do, she always calls me to see if I want to play games with her, obviously I say yes! Anyways, this is the person I look up to.

How do they inspire you?

She inspires me in many ways, sometimes I try to impersonate her for fun! She is so good at playing instruments, sometimes, I want to be as good as her to make her proud of me! Another thing she is really good at that inspires me is maths, everytime I throw a question to her, she always answers straight away like Albert Einstein. I’m so inspired by my sister that I want to be exactly like her, same clothes, same instruments, same art, same..everything! Anyways, the main reason why she is my inspiration is because she is so good at everything that I envy! Sometimes, I remind myself that she loves me and she is proud of me. 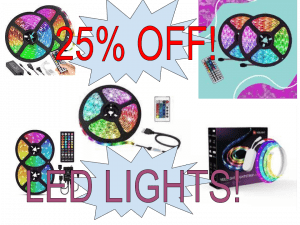 LED lights are strip lights that are 100% good lighting and makes you look cool! LED lights products produce 90% more effeciently than normal lightbulbs.These can also last up to 25 times longer than normal light bulbs. LED lights are strip lights that can change into many different colours and it can also help you to sleep at night. Did you know that led lights have been tested and they can last up to more than 100,000 hours! Amazing right? They come in many different sizes like big,small,medium and some other sizes! You can also change it to the color your feeling.

Today, I wanted to set some goals for myself to achieve by the end of 2022. Here are 5 main goals that I really want to achieve:

• I want to learn how to tune my guitar and how to play songs on it.

•  Another interesting thing I want to set is improving my growth mind set.

• I want to achieve 160 blog posts by the end of the year so I can improve from last year.

• For my final goal, I’m going to participate in every activity that we do in class so I can learn some new things!

On the 6th of june 2022, the warriors had a game against the Melbourne Storm, whoever won gets free tickets to a resort in Hawaii. They were outstanding in the beginning because they got 6 points to 2, but then the Melbourne Storm caught up to their score and it was a full-on tie. It was really intense but it was half-time, the warriors went to their coach, and the coach explained some strategies about how they could win. When half-time was finished, they ran back out to the field and started playing intensely. Everybody was cheering them on, “Warriors, warriors!” They won and took the trophy with them to the Hawaiian resort the next day. They had a nice time at the resort playing rugby.

Once in a kingdom that no one from the outside world has ever heard of , was a family of royalty and their beautiful village. The village below was man-made and beautiful. Little did they know that they had a dungeon deep in the ground where bones and skulls lived. But one unknown species survived for over 1000 years. He eats the rats and toads that stumble in the hole that he tried to make but failed.

He also lived alone because he ate everyone that sat in there with him. He smelt like rotten cheese that hasn’t been touched in years. The princess or any royalty that is currently alive doesn’t know about him because their ancestors did not tell anyone.

One fateful day, the beautiful princess was walking along the seaside, until she heard growling coming out of nowhere. When she titled over to listen to the ground she could hear it getting louder! She ran back to her castle calling for all the guards. The guards rushed down to see her starting to dig in the dirt, they were VERY confused. One guard asked her “Princess, may I ask why we got called down?” She became furious and said “Isn’t it obvious?! Help me dig down!” The guards nervously said “Yes princess Eleina.” They began digging and digging until..they heard a loud metal CLANG! They uncovered the dirt that lies on the top and there they saw..A TERRIBLE..LOOKING..OGRE!!

They screamed at the top of their lungs, while the ogre was pulling the princess down with him. The princess accidentally hit her head on the metal bar which caused her to faint on the muddy floor. The guards ran back to tell the king while the princess wasn’t breathing!

While the princess was unconscious the ogre was scared! The reason why the ogre was scared was because he thought he killed her. He had no idea how to save her, so he thought knocking himself out would help, but obviously, it didn’t. Now they were both unconscious and nobody was around because it was a VERY deep hole. They were frozen for 5 hours with no sudden movement. Finally, a little girl skipped past the hole and looked down, she could barely see so she went down for a closer look. She was very good at mountain climbing so climbing down will be easy for her. She finally reached the ground and saw them laying still, she was confused. The little girl felt their pulse but it was a very weak response. She said once, “Hello, are you alive?” They didn’t respond. She said it again and again and again, BUT, still no response. She started worrying and tried to figure out what to do, but her mind was blank. Another thing she had to worry about was how to get out of the hole. The little girl had too much to think about so she was crying.

While she was crying, she didn’t realise that her tears on the ground were turning into pure gold juice! She looked down and stopped crying, the gold juice spun around into a gigantic genie. The genie realised that he was alive after 1500 years. He quickly looked around until he recognized the ogre. It turns out that he and the ogre were secret brothers! But right now the genie didn’t care about that and said to the little girl, “I will grant you one wish, one wish only.” It took her 30 minutes to think about what she was going to do, save them all and take them out of the hole or become rich and famous in the village. She finally picked her decision and she said “ I wish..that the princess,me and the ogre would go to the top of the land. The genie said “Your wish shall now be granted.”

The genie granted the wish, and the princess,the ogre and the little girl floated all the way to the top of the hole. The ogre and the princess magically woke up and they were relieved they were still alive. Even though the princess still felt alerted every time she was around the ogre, she didn’t care. To present their friendship, the generous princess gave the ogre an unlimited amount of toads to eat. Also in the end she let the ogre sleep in her old guest room and he really loved it.

Task Description: Today I have posted my narrative writing that I have started 2 days ago. Also the ogre was 1201 years old and the princess was 21 years old, if you were wondering. Hope you visit my blog again! 🙂