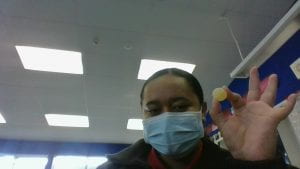 Today, Mr Moran decided to go to a candy shop and bought some lollies for his class to taste test. It was a blind test with a partner, the partner also had to give it to you to feel and smell. It felt very hairy, like a coconut. Some things on the ball were falling off so I actually thought it was something very weird. Also it was very small.

It smelt like nothing to be honest when I had my mask on, but when I took my mask off it smelt like very old cardboard that hasn’t been touched in years, but it also smelt very sugary and sweet.

When I finally put it into my mouth my face changed, my face went very sour and I looked like I was exaggerating very hard. My face felt like it was squishing together and I wanted to spit it out SO bad! Once all the citric acid melted into my mouth, it tasted very sweet, like a normal lolly. I bit into it and a fizzy juice came out of it, it tasted really nice so I savoured the flavour until it went out. It was also funny how I asked for a napkin to spit the lolly in but, I never did! I toughened up and swallowed it!

A really weird fact was it was the most sour lolly that New Zealand has ever made. Usually every sour lolly is made in America but New zealand decided to make their own. Overall I rate it a 10/10.